Sauve Qui Peut (La Vie) Every Man for Himself 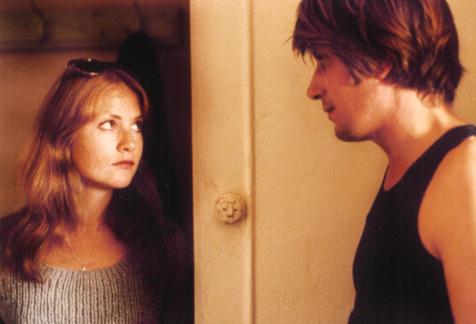 Godard’s charm is particular: his ability to hold us close to his characters, shake us for a reaction, and then pull us back to the position of voyeur. Sometimes we are with them, and sometimes we aren’t. Depression and solemn selfishness sit at the core of the central character Paul Godard (a comic wink to the director himself) and his interaction with the other characters is often unsettling intimate.

Sauve qui Peut (La Vie) is divided into four sections: The Prologue’, ‘The Imaginary,’ ‘Fear’ and ‘Commerce.’ The prologue presents Paul (Jacques Dutronc) as a film-maker who is hit on by a male hotel-worker in a Swiss car park. ‘The Imaginary’ places Denise (Nathalie Bye) as a free woman who has choices: will she leave her boyfriend Paul and the apartment they share? What will be her next creative project, a novel perhaps? She is a woman who is on the road. Godard wants us to understand that her spirit is free.

In ‘Fear’ the skies darken. Depression, self-hatred and its subsequent destruction ensue: Paul connects with the film-maker Marguerite Duras’ quote that she ‘only makes films because she can do nothing.’ He is obnoxious to his ex and their child, has a violent argument with Denise and then hires Isabelle. They have sex like robots, while Huppert’s mind thinks about the practicalities of the next day.

‘Commerce’ belongs to Huppert. Godard shows her life as a prostitute: the pimps, working in hotel rooms (looking understandably sullen) and negotiating her discontent flat-mates. Godard touches taboos through Isabelle’s clients’ requests: she is hired to play a man’s daughter in a fantasy-incest scenario. Alongside are other scenes showing domination and submission, violent relationships and an unforgettable, playful allusion to bestiality.

None of this shocks us: instead we are intrigued and quietly disarranged. Up close, we are sickened by Paul’s treatment of his daughter and ex-wife. Yet, at the same time, numbed.  Godard achieves this through visual jolts: stills and blurred movements. They detach us and take us to a place where we can sit disconnected and observe.

Isabelle Huppert’s performance is the other heart of the film, and beats well alongside Godard’s charm. Explained more fully in a recent mini-essay on Huppert here at 52frenchfilms, Isabelle has a ‘still motion’ in her facial expression and her body. It is a paradox: controlled and wild, robust and fragile, enigmatic and open. Her ‘still motion’ creates a space, a vacant room that positions us in her mind, making us stronger with her suffering, and resilient with her distance. We see things with her cool regard.

Godard has us where he wants us: we’re welcomed into the eyes of Isabelle and are apart from her too, watching and responding to her complicated world. Sauve qui Peut (La Vie) is as relevant today as it was in 1979, upholding the position of an involved connection and a chilly view, thanks largley to Huppert’s generosity and it is Godard’s genius.