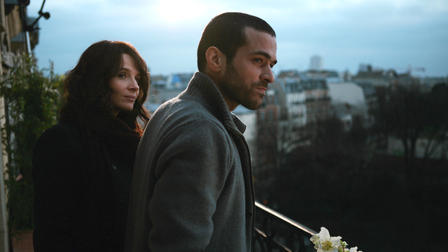 ‘Where is the Universe?’ asks Élise’s (Juliette Binoche) daughter in the title sequence. Élise is with her children, standing high, looking over Paris. ‘The Universe Is everywhere,’ she declares in a calm, unassuming voice. And then director Cédric Klapisch cuts to a shot of Pierre (Romain Duris), Élise’s brother. He is standing on the balcony of his apartment, looking out over the city, facing away from us. And then the title appears ‘Paris’ appears across his back. Immediately, we learn Pierre has a fatal heart condition. He is at the heart of Klapisch’s Paris and his Universe is crumbling.

As with many of Klapisch’s films (Pot Luck, Russian Dolls, Chinese Puzzle and the new TV series Call My Agent) the narrative is built from an ensemble cast, who are all connected to each other in some way: neighbours, students, teachers, colleagues, friends, family, lovers … Alongside Élise’s sister, there is the highly-strung owner of the local bakery, food market traders, and the mourning architect (Albert Dupontel) and best friend to professor Roland (Fabrice Luchini).

Luchini’s Roland is intense and his cynicism is a delight. In Roland’s view ‘beauty is disgusting.’ Roland is a romantic and his obsession with one of his young students (Mélanie Laurent) renders him out of control. With unguarded boyishness, Roland texts her quotes from Baudelaire. He’s persistent, creeps her out a bit, but his persistence pays off. He ends up getting what he wants.

All of Klapisch’s characters walk and talk, and eat and talk and love and talk. No surprise then, that Klapisch learned his craft in New York and he is frequently compared to Woody Allen. Klapisch’s directing is intimate: it presses our faces against the screen that separates us, and the characters. We are close to the cafes, the balconies and the soft pillows of their lives. And all the while Pierre, the man with the medically broken heart sits and stands in stasis, brought on by the indecision about whether to have a transplant that has a 40 percent chance of succeeding.

Klapisch’s choices are an echo of all the manipulations and attentions of today’s hand-held device. The sliding, enlarging, and the swift moving forward; just like our fingers across the small screen. The lives in Klapisch’s Paris may be muddled and playful, and their hearts curious or sick: but the point is they never stop. It is this energy and motion, complete in style and content, which highlights Élise’s line fluorescent: yes, ‘The Universe is everywhere.’ Klapisch is winking here; the Universe is Paris, if only for a couple of hours.