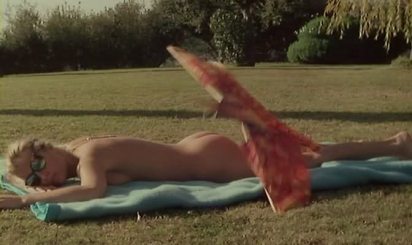 Misogyny is the chilly wind in Claude Chabrol’s disturbing 70s thriller which holds Julie’s (Romy Schneider) face at its centre (she is the only woman in the film), luxuriating in her beauty, her desire and her self-control.

The arresting opening scene places Julie sunbathing naked in the garden of the St. Tropez home she shares with her impotent, puffy and alcoholic husband, Louis (Rod Steiger). A kite drifts down and lands on her bottom. Jeff (Paolo Giusti), their neighbour (a vaguely appealing rogue, who describes himself as a lazy writer), approaches Julie, retrieves his toy, and almost immediately, the two become lovers. Time is spent together on deep-pile rugs and expensive sofas, while Louis is either in the room, or elsewhere in the house, depressed and half-collapsed on whisky.

Before long, Jeff and Julie hatch a plan to get rid of Louis so they can be free, and live off his estate. One night, Julie strikes a blow at Louis while he is asleep. On the film’s initial release, this scene received some criticism that anyone who sees a wife bludgeoning her husband (who is totally concealed under a blanket) in bed, would, of course, expect him to turn up later. However Chabrol’s apparent clumsy use of convention is a successful tactic to stop us being too compelled by suspense and direct our attention towards Julie, the influence of her beauty, and the hollow rattle of 70s sexism.

Of course, things don’t go according to plan. Jeff disappears, and Louis’s body isn’t found (unsurprisingly); and when the police discover his bank account is empty, Julie finds herself the prime murder suspect.

Schneider’s Julie is seen as part goddess and part whore, on the receiving end of both male curiosity and abhorrence. Louis, Jeff, the detectives, the lawyer and the family’s financial advisor all register their sexism and on more than one occasion Julie asks ‘Why do you hate me?’

It is worth quoting some of the grim, misogynistic comments. From Julie’s lawyer: ‘If she wasn’t such a beauty I wouldn’t represent her.’ From the detectives: ‘the bitch knows more than she’s talking about. Women like her frighten the pants off me.’ And, more alarmingly, from the financial advisor: ‘It’s just that I don’t like women’, ‘she would steal your gold fillings if she could’ and ‘you shut up you stupid female!’

Julie’s elegant silence and careful-responses to the unpleasant men place her high on a throne, triumphant, which is exactly where Chabrol wants her.

By the end, her liberty is secured as a result of her beauty and its power, which is as easy on the eye as it is disturbing for the heart, registering a cynical portrait of an era passed, but no doubt, sadly accurate.